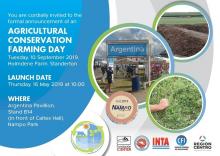 On the 10th of September 2019 the Argentine farmers' day was held at the farm of Mr Hendrik Oddendaal located in Standerton, Mpumalanga Province. Mr Oddendaal, who is already farming with Argentine no-till technology machinery, gave a presentation on the advantages and the yield improvements that come from the implementation of this technology and was followed by a technical talk by INTA engineers on the no-till system.

The participating Argentine companies (Abelardo Cuffia, Apache, Argentino Cipolatti, Asociados Don Mario, Auravant, Carlos Mainero, Ombu, Pierobon and Rizobacter) along with the INTA engineers invited the South African producers on a tour of the previously prepared display plots where the advantages of the system and use of the Argentine Machinery were demonstrated.

To finalize the event, the Embassy of Argentina and the organisers invited the participants to enjoy an "asado"/ braai which gave place to an exchange of information and contacts between the producers and Argentine Delegation. H.E Ambassador Alberto D'Alotto welcomed all the attendees and trusted that this event would create the possibility of agricultural comercial exchange in South Africa.

In terms of attendance, 150 producers from Mpumalanga Province participated. The event was also attended by Dr. Hendrik Smith from the Grain SA, Institution that represents South African agricultural producers.