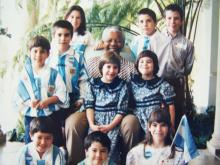 Last week, images of Nelson Mandela’s fragile health condition were transmitted around the world. Having grown up in South Africa during the ‘90s, I’ve always been drawn by events taking place in this very unique part of the African continent. Thankfully, Madiba remains strong and has managed to ward off yet another threat to his life, but at 94 years of age it is hard to tell for much how much longer he will be able to keep on cheating death. So, instead of waiting for that dreaded day, I thought, why not celebrate the life of the greatest South African that ever lived right now, while he is still with us?


On the day Madiba finally leaves this planet, a country would have lost its most emblematic statesman, a family a beloved relative, a generation of politicians a remarkable role model, and 20th century history would have lost one of its most iconic figures. But above all else, humankind would have lost an outstanding human being.
Nelson Mandela will be remembered first and foremost for his exceptional human qualities, and in this sense his death will be not just South Africa’s, but all of humanity’s loss.


There is a very special part of my heart that belongs to the southern tip of the “Mighty Continent”. The first memory I can recall as a human being takes place in the then-Transvaal province where I grew up. The first friend I remember having was a South African named Robert. The first song I ever learned was the Nkosi Sikelel’ iAfrica. The first image of spring I have is of the jacaranda-covered streets of Pretoria.
The first professional sports game I ever attended was at Ellis Park.
The first time I remember swimming in the sea was along the coast of the Cape Province, in the bone-chilling waters of the Indian Ocean. And the first politician I ever heard about was Nelson Mandela.


I lived the first years of my life in Pretoria, from 1992 to 1997, which means that I had the unique opportunity to live in this country during and after Apartheid. These were probably the most fascinating years of South Africa’s entire history, and my only regret is not having been old enough at the time to fully understand and appreciate this remarkable period. It is only as an adult that I have looked deeper into South Africa’s history and organized my scattered day-to-day childhood memories within the broader political and social context, making sense of it all in hindsight.
I remember how every Friday morning during assembly we would gather in the school’s main hall to sing the Nkosi Sikelel’ iAfrica, one of many post-Apartheid initiatives to bring the “Rainbow Nation” together. I remember how I would play football with my black friends, and for some reason only cricket with my white friends. As a child I didn’t think too much about it, it’s just the way things were. Black kids were relatively poor and liked to play football, and white kids lived in bigger houses and preferred rugby or cricket. With my black friends we would talk excitedly about Bafana Bafana and South Africa’s chances at reaching the next World Cup, while with my white friends we would go on about Hansie Cronje and James Small. As children, we did not even know what Apartheid had been, but we were unconsciously perpetuating it. Laws can change overnight, but social interactions and customs persist long after the ink has settled.


On one very special day, I actually got to meet Nelson Mandela. The President’s Office had organized for all the children of the diplomatic corps in Pretoria to meet him during a brief visiting session. I remember walking up the never-ending steps of the Union Buildings, waiting endlessly for our turn to meet Madiba, and actually not wanting to be there, preferring to be back at the house playing around the trees with my neighbours! The only thing the 7-year old version of myself knew about this man was that he was the President, and a very informed friend had told me that he was a man of strange habits: he would rise every day before first light, make his own bed and go for a walk, which I thought was quite odd considering that as head-of-state he must have had hundreds of servants at his disposal and he should certainly be able to sleep in if he wanted to. Who was this guy? Finally, after a couple of hours our turn to meet the President arrived. I don’t remember much, it was all a rather expeditious affair, but the one thing that I will never forget are his eyes: weathered from exhaustion and pain, yet displaying the most silent, noble strength, and wisdom that can only come from years of experience. Knowledge can be acquired. Wisdom can’t: it grows from within, and the truest wisdom can only be grown, not through success, but through repeated failure and years of toil. If there is one thing that those eyes had, it was wisdom in its purest state.


Up to this day, that photograph with Mandela is proudly displayed in my family’s living room, and it is one of many reminders of how well South Africa hosted us, and how fortunate we were to live there during the golden years of its modern history, under the spell of “Mandela Magic”. Today, South Africa faces the challenges of violent crime, rampant corruption, extreme income inequality, and a spiralling HIV-AIDS crisis, among other problems. Some have argued that the democracy honeymoon that came with the 1994 election arrived at a dead end after Mandela stepped down in 1999. Some have argued that “Mandela Magic” is the only thing that stopped a civil war from breaking out in the early years of democracy. South Africa’s future is far from certain, but if there’s one thing we can be sure of it is that the events of the ‘90s were a turn in the positive direction for the country, and it is almost a miracle that the whole process evolved in relative peace, considering the violent history of Africa and the disastrous outcomes of neighbouring racist regimes such as Rhodesia under Ian Smith. I’m not a big fan of counterfactuals, but it is worth asking ourselves what South Africa’s transition into democracy would have been like in the absence of a leader as magnanimous as Mandela. In the same spirit, it is also worth asking ourselves what Zimbabwe’s transition into democracy would have been like in the presence of a leader as magnanimous as Mandela. The fact that we can even consider asking whether a single person can determine the outcome of a nation is a testament to the greatness of Mandela.


We can agree or disagree about Mandela’s earlier years, his role as
co-founder of Umkhonto we Sizwe and its attacks on both civilians and
government officials. After all, the early Mandela could have easily
been labelled as a terrorist by any modern definition of the term, and
in fact, most countries around the world classified Mandela’s Umkhonto
we Sizwe as a terrorist organization without much quarrel. As a matter
of fact, he was only removed (in spectacularly embarrassing fashion)
from the US State Department’s Terrorist List in 2008. I would rather
leave the debate about the early Mandela to the academics, and I prefer
to remember the Mandela that the world got to know after his time at
Robben Island.


The power of human transformation is an amazing thing. Nelson Mandela is
a man who has had a far from perfect life, but there is one thing he did
which really was perfect, and that was the act of forgiveness. Above
all, Mandela’s single most exceptional decision as “Father of the
Nation” was not so much to run for elections, give grandiose speeches,
or implement sensible public policy, but rather, to forgive. His most
exceptional act was precisely to restrain from acting.
Mandela’s decision to bury the hard feelings of the past and to stretch
out his hand to the people who kept him behind bars for 27 years took
South Africans, black and white, by complete surprise. It is near
impossible to find such acts of magnanimousness in the dog-eat-dog realm
of politics, and it should be an inspiration for all of us to take a
moment to look into our own little lives, the petty grudges we might
hold against each other, and simply let go.
Forgiveness is the most liberating force on this planet. It took Mandela
27 years behind bars to realize that, so let us not allow those 27 years
to have been in vain, and let us all honour the memory of the man by
replicating what he did best in our own small, private lives. We are all
our very own Robben Island prison wardens. We all have the keys to
unlock the fetters of grudge and embrace forgiveness: it's just a matter
of having the courage to use them.