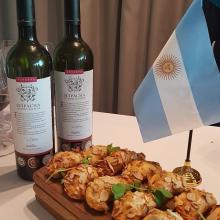 On September 6, the first Argentine Day in the city of Cape Town was held at the President Hotel and consisted of a unique event for commercial promotion of Argentina at which a wine tasting and Argentine gastronomy was offered fused with South African flavors.

H.E Ambassador Alberto D´Alotto inagurated the event and discussed the Argentine wine production as well as its potential for export to the South African market.

The Argentine cuisine menu, designed in conjunction with the chef from the President hotel, was specially prepared to pair with each of the Argentine wines offered.

On this occasion 6 Argentine wines were presented, which are not yet in the South African market, belonging to 5 Argentine wineries from different Argentine winemaking regions. The aim was to facilitate their introduction into the market.

Some of the important wineries are small boutique production wineries that participate in the export market, so the aforementioned activity also had its impact at small and medium enterprises levels.

- End of the world

A group of large importers, distributors and restaurant managers with a long history in the South African wine market attended the event. It was an opportunity to showcase our wines and help introduce them to the local market. Media specialized in gourmet products were also in attendance.