Why Invest in Argentina?

WHY SHOULD YOU INVEST IN ARGENTINA? 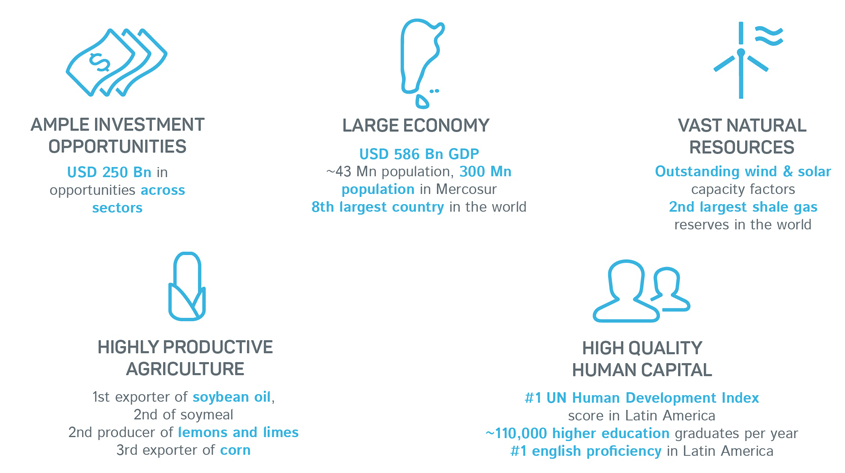 Since President Mauricio Macri took office in December 2015, the government has been working to provide a macroeconomic environment and a stable and suitable regulatory framework that turn Argentina into an attractive destination for Foreign Direct Investment. A suitable investment climate, together with the country’s comparative advantages and growth prospects, offer unique investment opportunities.

Regulatory and macroeconomic improvements
- Elimination of capital repatriation restrictions
- A floating exchange rate and recovery of the central bank’s reserves
- Re-integration into the global capital market
- Elimination of the fiscal deficit and a drop in the inflation rate to single digits over a period of four years
- Elimination of export tariffs (except soybean, reduced to 30%) and easing of import permits
- Gradual decrease in subsidies for public services and increased rates to promote investments in this sector
- Reliability of national statistics (INDEC).

As a result of these initiatives and the positive outlook, the country risk has dropped from 620 basis points in September 2015 to 415 in March 2016. A private sector with low debt levels provides a solid platform to finance investment and consumption, thereby setting the economy back on track towards growth.

A large and diversified economy
• 3rd among the largest economies in the region, with a GDP of $500 billion (after Brazil and Mexico)
• 2nd highest GDP per capita in the region in terms of PPP ($22,600, after Chile)
• 4th among the countries of the region in terms of population (43 million), with 93% in urban areas; an average age of 30; and a vegetative growth of 0.9% annually. With a demographic dividend until at least 2030
• An unemployment rate under 6.6%. ~ 75% of jobs are in the service sector

Solid institutional framework
• Over 30 years of democratic governments, five changes in governments made up by different political parties since 1983
• Legal and regulatory frameworks inspired by developed countries
• A system of republican and federal government guarantees autonomy to provinces
• A wide range of agreements and bilateral and multilateral treaties (G20, Mercosur, UNASUR)
• Member of the International Centre for Settlement of Investment Disputes of the World Bank (ICSID)

Developed infrastructure
• Extensive road and rail networks throughout the country (+35,000 km each), 43 ports and 54 airports
• High level of connectivity, with 75% broadband and 141% of mobile devices
• Extensive energy coverage through gas pipelines and the National Interconnected System (SIN) for electricity
All of the above shows that Argentina is ready to position itself as an attractive destination for Foreign Direct Investment

Get into the following links to get to know detailed reasons per section: